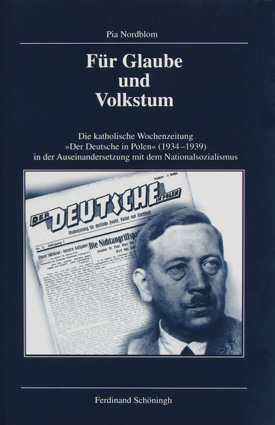 National Socialist »alignment« (Gleichschaltung) policies fundamentally altered Berlin’s close relations with the German minority in Poland even in the Weimar period. Eduard Pant (1887–1938), Poland’s leading Catholic German politician, recognized early the danger that the Germans of Poland could become manipulated as the political object of the Nazi regime. But he failed to establish his position as the dominant one in the Catholic German minority in Poland, which split along pro- and anti-Nazi lines. Politically isolated, Pant launched a journalistic counterattack. The conservative Catholic paper he founded, »Der Deutsche in Polen« (The German in Poland) (1934–1939), quickly evolved into an important beacon for Christian emigres and opponents of National Socialism far beyond Polish borders, as well as for the still »unaligned« minorities in East-Central Europe.

The author relies on a large and diverse body of sources, mainly from German, Austrian, and Polish archives, as well as previously unknown privately-owned materials and the contemporary press. She reconstructs thoroughly the political and cultural world of the German minority in Poland. At the same time, her organizational history of this particular Upper Silesian newspaper, and her careful analysis of its content, contributors, and readership represent major additions to the field of press studies. Finally, Nordblom’s book constitutes a noteworthy contribution to research on resistance – especially that put up by the Catholics of Upper Silesia – and to the history of German-Polish relations on the eve of the Second World War.