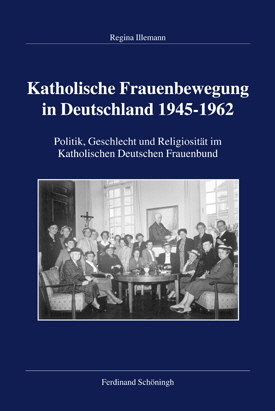 ›Children, cooking, church‹ has long been the stereotype of ›woman‹ during the Adenauer era. The Catholic Church is generally counted among those institutions that helped preserve this traditional image. Yet the case of the Katholischer Deutscher Frauenbund (Catholic German Women’s League) demonstrates a different, much more dynamic reality.

At the center of the study are Catholic women who after 1945 determined to continue the work they had begun in 1903 as a Catholic women’s movement and who made a name for themselves by taking independent positions both within the Church and in society at large. Even in an organizational sense, the firmly female senior leadership contrasted with those Catholic women’s associations that were headed by clerics and involved mainly in charitable or spiritual activities. Women such as Helene Weber, Gertrud Ehrle, and Aenne Brauksiepe successfully resisted attempts by the bishops to tie their association closer to the church hierarchy.

In its social conceptions, the Frauenbund distanced itself from traditional gender roles and instead – following the lead of the secular women’s movement – put forth emancipatory claims. From their equal appreciation of the various types of family status came a high estimation for single working women. The Frauenbund’s view of matrimony based on a partnership of equals informed the reestablishment of Catholic marriage counseling, while efforts to promote post-natal convalescence were intended to raise awareness of the contributions of mothers. The Frauenbund promoted vocational apprenticeships for women and encouraged them to participate in the political process. Thanks to its far-reaching personal network, the Frauenbund was more successful than other Catholic organizations at getting the convictions of its female members heard in the political and inner-church discourses. Not infrequently, these dedicated women ruffled feathers. Religious rootedness and spirituality did not contradict this determination to be heard; rather, they served as its very foundation.

The persuasive study provides new insight into the religious self-understanding, Catholic networks, sociopolitical debates, and the scope for action of the Catholic women’s movement after 1945.