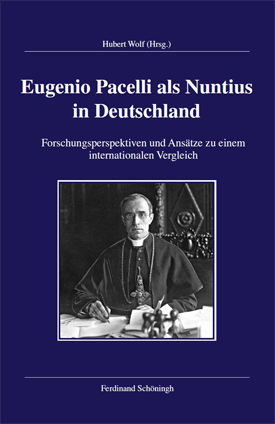 In the Vatican Secret Archives, extraordinary document collections have been available to researchers since 2003 and 2006: the files from the pontificate of Pope Pius XI, which encompassed the historic epoch of upheaval between the World Wars. These include the reports that Eugenio Pacelli sent to Rome while serving as nuncio in Germany between 1917 and 1929. As papal envoy, Cardinal Secretary of State, and subsequently as Pope Pius XII, Pacelli helped determine the destiny of the Vatican for more than four decades. As part of a long-term project funded by the Deutsche Forschungsgesellschaft (German Research Society) at the University of Münster, approximately 6,500 nunciature reports are being made accessible to the public in an online critical edition.

The present volume publishes scholarly articles originally presented at an international symposium in 2010 devoted to Eugenio Pacelli’s career. They point to the opportunities made possible by a comprehensive examination and thorough analysis of these newly accessible sources. Moreover, these examples of internationally networked scholarship break down the boundaries between the overwhelmingly national perspectives on Pacelli and the Roman Curia that have obtained up until now.

The articles place the manifold activities of arguably the most important diplomatic envoy of the Vatican within a larger context. They examine underlying structures, norms, and patterns of perception, which likely had a decisive influence on his eventual pontificate. Additional case studies of the nunciatures in Austria, France, Italy, Czechoslovakia, and Poland, as well Catholic political parties in various European countries, make possible a transnational comparison.

In the process, an outline emerges of the Roman Catholic Church as a »global player« during the crisis-ridden interwar years.