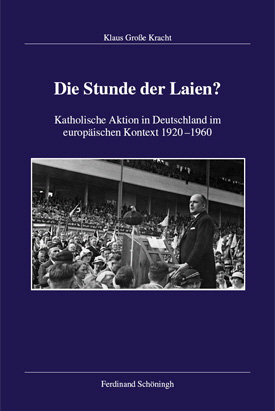 Catholic Action (Actio Catholica) was a worldwide lay-apostolic campaign by Popes Pius XI and Pius XII to ›Christianize the world.‹ They intended to counter the so-called ›plague of laicism‹ in the largely secularized societies of the 20th century by setting up a religious ›defensive front‹ of Catholic laypeople.

The program, which in its papal origins was thoroughly anti-modern, aimed to achieve a ›fundamental political‹ penetration of society. Through training sessions and public relations efforts, the faithful were to be mobilized on behalf of Church interests. Catholic Action’s methods included assemblies, petitions, and flyer campaigns, as well as liturgical celebrations and religious retreats.

Those who embraced Catholic Action’s cause as their own were considered part of a religious lay elite; few were the Catholic leaders of the time who failed to orient themselves on Catholic Action’s body of thought. In the years following World War II, however, the all-too-restrictive scaffolding of Catholic Action was increasingly called into question, while the ›coming of age‹ of the individual Christian in the world received more emphasis than before.

Among historians, the importance of Catholic Action was long underestimated. This study demonstrates for the first time how deeply German lay Catholicism from the Weimar Republic to the early Federal Republic was shaped by their ideas. German Catholic laypeople looked with interest to Italy and France, seeking inspiration from the efforts to implement the papal program in those countries. At the same time, they reflected on their own experiences, in the church and the world, in the context of Catholic Action. In Germany, too, this formed the central field of experimentation in which the German Catholic assumed his ›modern‹ form. This innovative study offers a comprehensive account of this central dispositif (M. Foucault) of European lay Catholicism in the 20th century.