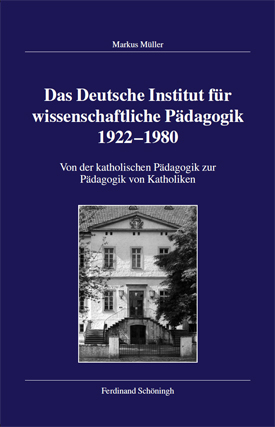 The Deutsches Institut für wissenschaftliche Pädagogik (German Institute for Scientific Pedagogy) was founded by Catholic teachers’ associations and pedagogically interested professionals in Münster in 1922. Its goal was to establish a ›Catholic pedagogics‹ as a ›bastion‹ against any and all ›relativism.‹ In the course of the 1920s, a modern research and continuing education center endowed with considerable financial means was set up, which lasted and where Edith Stein worked as a lecturer from 1923 to 1933. The conflicts that followed in the ensuing years of dictatorship culminated in the forced closure of the institute in 1938.

As an attempted response to the ›de-Christianization‹ of society through National Socialism, the institute was rebuilt after 1945, under the banner of a decidedly confessional education policy. During the 1960s, in the context of Vatican II, debates over education reform, and the ›empirical sea change‹ in educational science, the institute moved away from the notion of a ›Catholic pedagogics.‹ For a time, its leaders pushed through a holistic-individualistic educational theory with Christian aspirations. After 1970, they turned to ›curriculum studies,‹ which was highly topical within education politics at the time. But a conflict over the ›Catholic‹ profile caused the German bishops to dissolve the institute in 1980.

Building on a broad foundation of unpublished archival materials and numerous contemporary journals, the author has written an institutional history that reconstructs both the typical thought patterns of a ›Catholic pedagogics,‹ as well as its personnel and institutional structures. Within a widely drawn arc, a multifaceted picture emerges of a Catholic pedagogics as a communicative network in the context of the sociopolitical, ecclesiastical, and scientific upheavals of the 20th century. This is the first thoroughly researched overview of a previously little-known chapter in the history of German education and Catholicism.