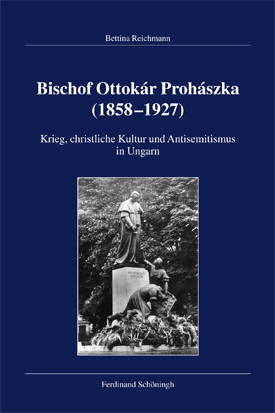 Even today, Ottokár Prohászka (1858–1927) remains one of the most prominent figures in the history of Hungarian Catholicism. As Bishop of the Diocese of Székesfehérvár (German: Stuhlweißenburg) and a proponent of political Catholicism, he played a leading role in founding and shaping a Christian socialist movement in Hungary. Prohászka responded to rapid social change and its attendant secularizing tendencies with a concept of renewal under the banner of ›Christian civilization.‹ Prohászka viewed Christianity as the only solid fundament of the Hungarian nation.

For the bishop of Székesfehérvár, the outbreak of World War I represented a kairos for Hungary to renounce laicism and lapsed faith, as well as liberalism, capitalism, and socialism, and return to a unity of faith, culture, and a Christian core nation. Toward the end of the war, as Hungary evolved into a more ›ethnically pure‹ nation-state in which Catholicism was the dominant confession, Prohászka’s critique of economic liberalism took on unmistakable anti-Semitic features. In a newly Christian-nationalist Hungary, there would be no place for a religion ›without ethnic awareness‹ or for its Jewish citizens.

The study traces the interconnections of Ottokár Prohászka’s theological thought, national consciousness, and political action. By demonstrating how his experiences and his interpretation of World War I linked Christian nationalism, confessionalism, and anti-Semitism in new ways, it sheds light on the transitions in Hungarian Catholicism between the traditional anti-Judaism of the Church and ›modern‹ racial anti-Semitism.