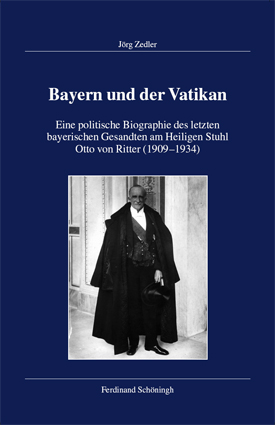 The legation to the Holy See was – alongside the one in Berlin – Bavaria’s most important diplomatic mission. This reflected the unique establishmentarian (state-church) rights of the Bavarian king as well as the special relationship between Munich and Rome up to the late phase of the monarchy. Indeed, the importance of the Roman legation actually increased during the Weimar Republic, as it was the last remaining diplomatic mission of note of a German Land after 1918. It was the Nazis who finally sealed its fate.

This political biography of the last Bavarian envoy to the Holy See, Otto von Ritter (1864–1940), reveals the individual scope for action, motivations, and modes of behavior of a diplomat during the era of political upheavals in the first third of the 20th century. Since 1889, Ritter served in the Kingdom of Bavaria’s diplomatic service, which sent him to Rome in 1909. He was the only diplomat of the Central Powers who returned to his pre-war post after World War I.

As a result, the envoy was in a position to work on what would prove to be his most important assignment during the Weimar era: the conclusion of the Bavarian Concordat in 1924/1925. Thanks to this agreement, Bavaria was able to preserve a residue of sovereignty within the German Reich. Pope Pius XI and his nuncio in Munich, Eugenio Pacelli, wrested far-ranging concessions from the Bavarian state; from the start, they conceived this concordat as a model for further treaties between the Church and individual states. When Bavaria lost its statehood and was degraded to an administrative entity under the Nazis in 1934, the story of the last Bavarian foreign diplomatic mission came to an end as well.

This study is based on a broad fundament of previously unknown sources, some of which have only recently become available in the Vatican Archives. It constitutes an important building block for German diplomatic history. At the same time, by delineating the possibilities and limits of Bavarian foreign policy between 1871 and 1933, it makes an important contribution to the political history of Bavaria as well.