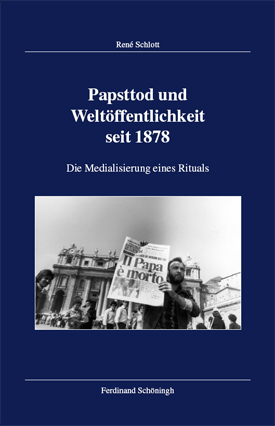 The dying, death, and burial of popes had always followed established rituals. From the last third of the 19th century onward, these religious events were penetrated by the media as never before and became part of the public sphere. The press, radio, and later television did not limit their activity to reporting on the death of popes, however; they also interpreted the proceedings. In the process, they exercised lasting influence on both the public reception and the collective memory of the events. This »mediatization,« in turn, retroactively influenced those who were responsible for ritual and its public presentation.

This cultural and media-historical study traces the dynamic transformation of »papal death« and »world public sphere« between 1878 and 1978 as reflected in the international press. It thereby demonstrates that, in contrast to Max Weber’s notion of the »disenchantment of the world,« the public’s fascination with the death of popes remained constant.

The pope’s paramount position as leader of the Catholic Church guaranteed that his passing away was always perceived as a significant caesura and was accompanied by a corresponding level of media attention that transcended borders. In this regard, it was of critical importance that, from the beginning of the 20th century, the Vatican carefully adapted the ritual surrounding the dying of popes to the changing public sphere. The technological modernization of the Vatican’s own media made it possible to steer the wider media coverage of the event. It was the Second Vatican Council (1962–1965) that finally recalibrated the long-ambivalent relationship between the Catholic Church and the mass-media-dominated public sphere. Global participation in the death of a pope and its mediatization peaked in 2005 with the public dying and death of John Paul II.

The present study ventures into unexplored territory; it breaks free from the established church-historical perspectives on the papacy to deliver insights into overarching and long-term changes to form and structure within the Catholic Church, from »modernity« to the present.