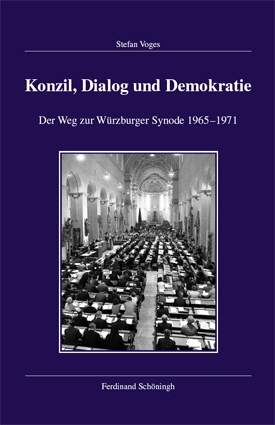 The Second Vatican Council (1962–1965) was a historical event that transformed the Catholic Church in ways that still resonate in the present. What ultimately guaranteed this long-term influence was that local churches embraced the decisions made at the Council.

In Germany, this reception process took place during the political, social, and cultural upheavals of the late 1960s. In the Catholic sphere, the notion of the Church as the ›people of God‹ reflected a new self-understanding. The new catchword ›dialogue‹ expressed a changed posture of the Church toward the world. Discourse across society was defined by a demand for more democracy and characterized by tremendous enthusiasm for debate, especially within the student movement.

The resulting tensions vis-à-vis traditional conceptions of order in church and society were discharged in explosive fashion at the 82nd Congress of German Catholics (Katholikentag) in Essen in 1968. Calls for a national council became louder. This impulse led to the intensive preparation and successful implementation of the ›Common Synod of the Dioceses of the Federal Republic of Germany,‹ which convened from 1971 to 1975 in Würzburg. During the preparation phase, bishops and laypeople were able to work together constructively, if not always without friction. Consequently, the road to the Würzburg Synod served as a key test case for the adoption of the Church’s renewed image following Vatican II.

For the first time, this road from Vatican II to the Würzburg Synod is traced in detail and on the basis of unpublished Church files and documents. The author describes the post-conciliar progression of the protagonists and situates the preparations for the Synod within the context of different reception processes. He explores the influence of both church and society and analyzes the genesis of the Synod’s constitution. In ecclesiological terms, the Würzburg Synod has been largely ignored as an event of German church history.  Unjustly so, because closer examination reveals the Synod to have been a theologically innovative experiment of inner-church decision-making and an example of the creative reception of Vatican II.