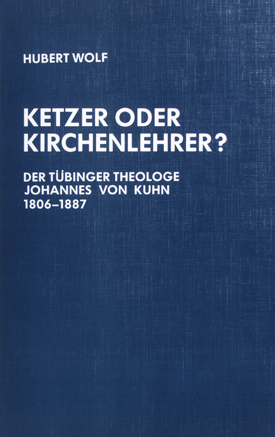 The history of Catholicims in the 19th century featured a long-running conflict between »liberals« and »ultramontanes.« The contours of that debate emerge clearly in Hubert Wolf’s biography of the Tübingen dogmatist Johannes von Kuhn (1806–1887). Considered a »crypto-Protestant« in the 1830s, Kuhn emerged as an »ultramontane« champion of the Church’s liberty in the years preceding the Revolution of 1848. He was celebrated as »neo-scholastic« theologian. After 1848, however, Kuhn was not prepared to draw the theological consequences of his side’s victory in the internal church debate. His opponents denounced him to the Inquisition, but they were to be disappointed: despite the many intrigues and the interpolation of »poor souls,« Kuhn received a fair trial in Rome and was not convicted. Nonetheless, Kuhn’s game was up. He never wrote another line of theology, remained silent on the dogma of papal infallibility (which he rejected), and sought alternative occupation in the realm of politics and culture.

Wolf’s study portrays Kuhn as scholar and speculative genius, but also as proponent, bystander, éminence grise, and victim on the stage of church politics. Based on newly discovered sources, this book offers surprising insights into the theological and intellectual history of the 19th century, the history of the Diocese of Rottenburg, the Catholic theological faculty at Tübingen, the Kingdom of Württemberg, the offices and congregations of the Curia, and not least 19th-century Catholicism, from Rottenburg to Rome. Wolf is also the first to reconstruct an Inquisition trial in all its details.