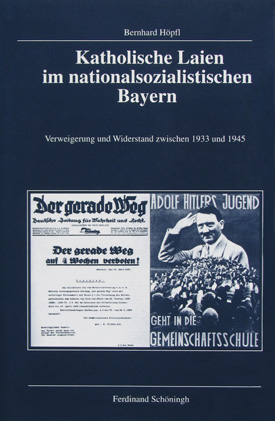 In the Third Reich, lay Catholics were often persecuted alongside clergymen. Before 1933, Catholics who felt a conscious attachment to their church were represented politically by the Center Party and, in Bavaria, by the Bavarian Peoples Party. The author traces the fates of these people and groups in Bavaria under the Nazis. At the center of this study he places an examination of journalists and teachers – two professional groups under especial pressure at the time to conform politically.

Using 400 documented cases from Bavaria, Höpfl describes in great detail the everyday repression and harassment accorded some devout Catholics. The many examples, wherein the Nazis established an ineluctable connection (in their eyes) between church-centered religious practice and intolerable political conduct, provide concrete evidence of the National Socialist state’s ultimate objective: an uncompromising totalitarian authority in all areas. Despite the trifling nature of some of these conflicts, the cases Höpfl discusses make plain that at no time were the Nazis prepared to relent in their totalitarian aim.In Bavaria, however, they encountered a deeply-rooted Catholic praxis of church and faith that transcended barriers between social groups and sectors. This universal religious fundament functioned as both basis and inspiration for lay Catholics in their resistance to National Socialist attacks on the Catholic Church.