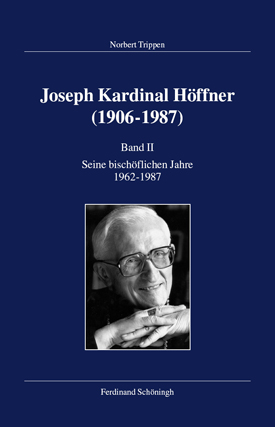 As the Bishop of Münster (1962–1969), the Archbishop of Cologne (1969–1987), and the Chairman of the German Catholic Bishops’ Conference (1976–1987), Joseph Höffner was one of the most important personalities of the Catholic Church in Germany. The prominent Cologne cardinal helped shape the awakenings and upheavals that occurred within the Church during Vatican II and its aftermath, in Germany and around the world.

Höffner’s work as Bishop of Münster was characterized by his participation in the Second Vatican Council (1962–1965) and by the straightforward implementation of Church reforms in his diocese. It continued during the 1970s at the »Würzburg Synod« and the world bishops’ synods. The Catholic Church’s unambiguous positions on sociopolitical controversies and ecclesiastical disputes defined his nearly two decades as the spiritual leader of the Cologne diocese and head of the Catholic Church in Germany. Höffner energetically opposed the unpunished termination of pregnancy in any form and warned about the risks of nuclear energy. He spoke out equally insistently against the fundamental rejection of essential resolutions from Vatican II on the part of Marcel Lefebvre, the suspended French archbishop and founder of the »Priestly Fraternity of St. Pius X,« and the theses of the popular Church critic and theology professor Hans Küng. In the scandal surrounding the troubled Vatican Bank, Höffner proved to be a reliable and judicious pillar of support in securing and reforming the papal financial institute.

Following a first volume that focused on Höffner’s academic work as a Christian social scientist, Norbert Trippen’s second volume – exemplarily researched, close to the sources, and richly illustrated – portrays Höffner’s subsequent career as a bishop. In the process, the book reflects how the Church dealt with societal transformation up until the most recent past.