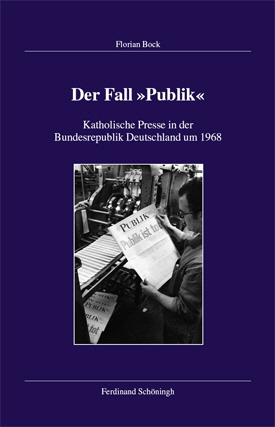 The case of the Catholic weekly newspaper Publik stands for the eventful reception history of the Second Vatican Council in Germany at the end of the 1960s. The study tracks the history and memory of this special journalistic experiment of the Catholic Church, while also shedding light on the wider impact of Vatican II in West Germany.

Launched with the support of the Church in 1968, Publik soon evolved into a source of dispute: the bishops criticized the ›red sales figures‹ as well as the reform-oriented outlook of the new Catholic weekly. In response, the paper’s supporters defended the ›spirit of the Council‹ against the interventions of the Church hierarchy. These disputes mirrored some of the sharp divisions within German Catholicism: a younger, intellectual board of editors attempted to push through their own interpretation of the conciliar aggiornamento against resistance from most of the bishops and in the face of receding reader interest. These attempts found expression in a newspaper that was increasingly perceived as ›progressive‹ and ›left-leaning.‹ The editors of Publik explored anew the boundaries of German Catholicism but their notions of ›church‹ demanded too much of the majority of German Catholics.

In November 1971, the German bishops brought the controversial media experiment to an end and ceased publishing Publik. But inspired by larger protest actions, individual groups from the Publik e. V. reader initiative ventured the systematic buildup of a successor paper that took a critical view of the Church, founding Publik-Forum in 1972.

The study goes beyond the narrower organizational history to reveal for the first time the discursive communication within post-conciliar German Catholicism, enabling fresh insights into the reception of Vatican II in Germany.