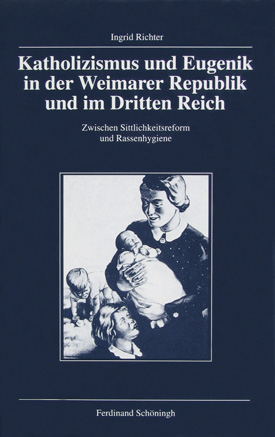 This book reconstructs the Catholic debate over the science of eugenics – considered modern at the time – from the Wilhelmine Empire to the »Euthanasia« program in the Third Reich. The author does not limit her study to a narrow potrait of prominent Catholic eugenicists such as Hermann Muckermann or Joseph Mayer; instead, she paints a variegated picture of the debate’s various phases, contributors, and currents. She demonstrates that the spectrum of positions on »positive« and »negative« eugenics was broader than previously assumed, based on awareness of the traditional limits of natural law and the 1930 papal encyclica on marriage, »Casti connubii.«

The study classifies Catholic positions in the eugenics discourse, which transcended the Weimar Republic’s political camps, and formulates a fundamental difference between Weimar-era eugenics and Nazi »racial hygiene.« The majority of Catholic eugenicists could and would not endorse the Nazi regime’s forced violations of human bodily integrity. They therefore returned to traditional positions based in natural law. This book makes important contributions to the history of eugenics as well as Catholicism in Germany.