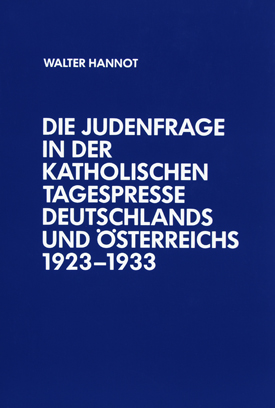 What opinion-shaping or influencing statements did those sections of the German or Austrian population who identified with political Catholicism take from Catholic daily newspapers on the subjects of »Jewry, anti-Semitism, and the race question« during the decade before Hitler’s seizure of power? What tendencies did those statements reveal? These questions are at the heart of Walter Hannot’s study.The author analyses a representative selection of daily newspapers from within and outside the Reich, that were associated with the German Center Party and the Bavarian People’s Party, as well as dailies of the Austrian Christian Socialist Party.The overall picture that emerges accounts for not only spectacular events and detailed reports of the day but also passing remarks and the minutiae of everyday affairs. To round out the picture, and serve as a control for reception of the Catholic media by the Jewish press, Hannot also includes the two most important German Jewish newspapers in his investigation.

Hannot does not limit his analysis of Catholic newspapers to content evaluation but also employs statistical-quantitative methods, which enable him to demonstrate the frequency with which mentions of the »Jewish question« occurred. In the process, he discovers an unexpectedly conspicuous difference between Germany and Austria: whereas the subjects »Jewry and anti-Semitism« possessed only marginal significance in Germany’s Catholic papers, they played a key role in their Austrian equivalents. In the German Catholic press, statements that could be classified as »anti-Jewish« by even the most exacting standards were statistically insignificant; in the Austrian papers, they constituted 50 % of all mention of Jews. These results are corroborated by Hannot’s counter-analysis of the two Jewish newspapers.