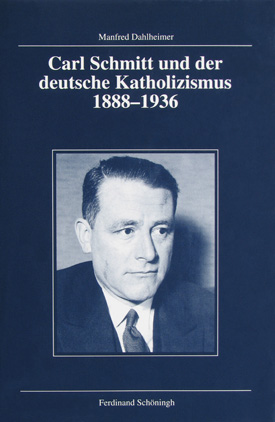 Like no one else, Carl Schmitt shaped, provoked, and polarized 20th-century debates over constitutional law. Does that make him one of the »classics« – or was he simply »harbinger and crown jurist for the Third Reich?« Even today, those who would interpret Carl Schmitt face this fundamental question. It is anything but easy to elicit the secret of his teachings from this sphinx among German constitutional theorists.

Scholarship on Carl Schmitt long ignored the fact that he was a Catholic. Yet in the 1920s, he became for many Catholics a beacon of hope in a scholarly community with a liberal self-image. To an astonished public, Schmitt presented Roman Catholicism as a model for the state and for the theory of constitutional law.

How Catholic were Carl Schmitt’s teachings on constitutional law and his famous political theology? What influence did Catholic theology and social teachings have on his theories? What ties and commonalities did he share with well-known Catholic intellectuals? What did Catholic contemporaries have to say about Schmitt and his work? How did he stand in relation to the various organizations and currents of German Catholicism – the Center Party, the associations, journalism, or the youth movement? What role did Catholicism play in Schmitt’s disempowerment in 1936?

The author grounds his exhaustive answers to these questions in his extensive familiarity with the sources. He paints a penetrating portrait of German Catholicism in the 1920s and 1930s, which, as the debate with Carl Schmitt shows especially well, was anything but a monolithic bloc.